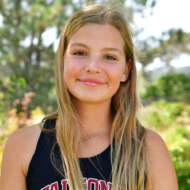 no season due to Covid 19

U14 Level One Futures
U16 Disney Showcase

U16 RUSH Elite Performance Group (varsity players) as a U14 player