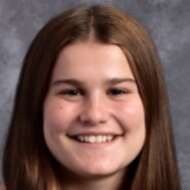 - NYS Section 1 Class A All State, All Section, All Elite, All League 1st Teams. Nominated for NFHCA Northeast Region All-American team as a sophomore. 15 shutouts, 5 of them in Section 1 and Regional Playoff game. 73 saves with a 93.6 % save ratio.
- NYS class A semi finalist.

- U14 National Futures Championship Gold Medal Winner with only 1 goal against in 6 games.
- National Hockey Festival Participant U16.