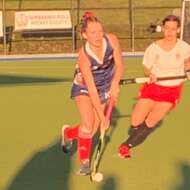 As a freshman, 1st Team All League, team offensive MVP, led team in assists, and led team to district finals