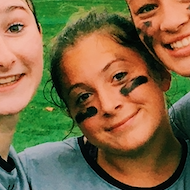 #17...Successfully made the Varsity Field Hockey team at Pingree School as the youngest freshman. Nina is a starter and an integral part of the team. She joined the team at the MaxField Hockey National High School Invitationals where her team won 3 out of 4 games.