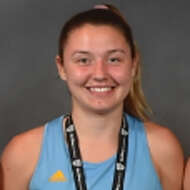 Only Freshman and only Freshman starter all regular and playoff season games.
Varsity Letter (Freshman)