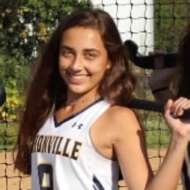 Recipient of the Brianne Carter Award, (presented to one 8th grade girl for contributions to the Athletic Program and Sportsmanship), Charles F. Patton Middle School